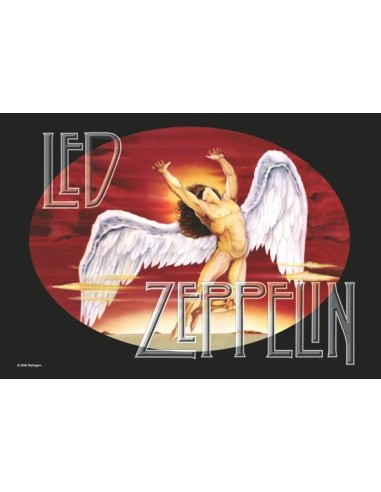 Swan Song Records was a record label launched by Led Zeppelin in 1974 after Led Zeppelin's five-year contract with Atlantic Records expired at the end of 1973.

Amon the artists that released material on the Swan Song label, we find solo projects by Jimmy Page and Robert Plant, but also Bad company or Maggie Bell.

The company logo, designed by Hipgnosis -famous for his collaborations with Pink Floyd, Black Sabbath, AC/DC or Scorpions- and illustrated by Joe Petagno -creator of famous Motorhead's Snaggletooth - is based on painter William Rimmer's Evening : The Fall of Day (1869)

Find this logo on this official flag Led Zeppelin - Swan song Records : on a black background, a figure of a winged human-like in a red sky.