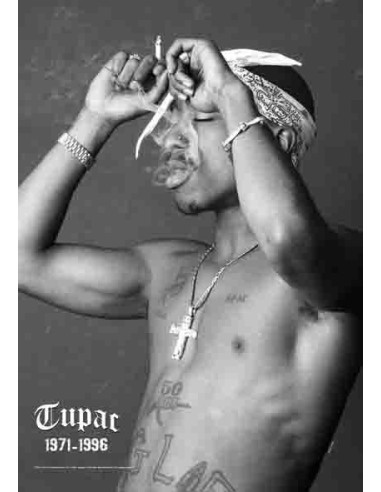 2Pac Shakur, his full name Tupac Amaru Shakur is an American rapper, born in 1971 in Harlem. Son of 2 active militants of the Black Panthers, he owes his name to Túpac Amaru II, an Indian tribal chief who led an Indian rebellion movement against the Spanish settlers in Peru in the 18th century.

He released 5 albums, including the famous 2Pacalypse Now and All Eyez on Me before his assassination in 1996 in Las Vegas. 5 posthumous albums will also be published.

On this official 2Pac - Smoke flag, we find the rapper, shirtless, bandana on his head, cigarette in hand and cross pendant.