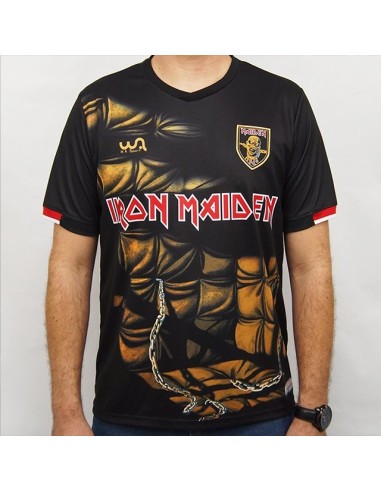 The Piece Of Mind model was inspired by the cover of the album of the same name, released by the English band in 1983. Here, we loosen the chains that bind Eddie - after all, nobody holds him!

Developed and approved together with Iron Maiden, the line of official soccer jerseys of the band was produced with the same quality and technology as the jerseys used by major clubs around the world.

The main feature of the Piece Of Mind model is the room where Eddie was stuck, sublimated across the front of the shirt. In the image, only the currents in space remain. The embroidered shield bears Eddie's face characteristic of Piece Of Mind with the inscription “Maiden FC”, making an allusion that, now, each of Iron Maiden's albums has become a team. The cuffs of the model's sleeves are black, with red and white details, characteristic of the album.

On the back of the shirt, highlighted, Eddie appears - now a fugitive. The number 83, corresponding to the year the album was released, is applied to the sticker in red and white.The inscription “Piece Of Mind”, referring to the inspiration album, is sublimated at the neck. The model completes the official product seal - rubberized in polyurethane - applied on the front, next to the hem of the shirt, certifying that you are purchasing an original and exclusive product, licensed and approved by Iron Maiden himself.

Based on 1 customer reviews