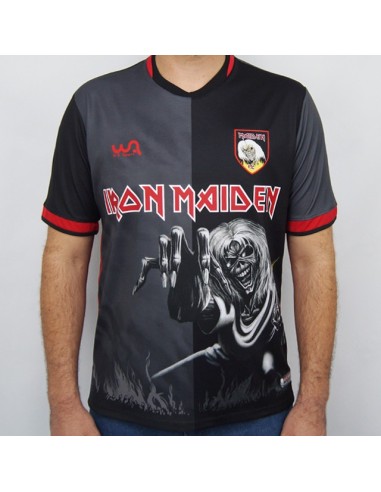 The model The Number Of The Beast was inspired by the cover of the album of the same name, released by the band in 1982. The shirt highlights part of the original illustration by Derek Riggs for the work that marked Bruce Dickinson's debut on Maiden.

The main feature of the model The Number Of The Beast is the division of the shirt in two colors: on one side it is gray, on the other, black. In the darker part, Eddie appears on the album cover, with flames of fire in his hands. At the bottom of the shirt are the flames of the original illustration, which would be purgatory. The embroidered shield bears the face of the band's mascot highlighted, with the same feature of the main characteristic image of The Number Of The Beast with the inscription “Maiden FC”, making a reference that we transform each Iron Maiden studio album into a team.

Despite the dark tones, the red color, present in Riggs' illustration, is also present in the model: in the black collar, in the cuffs of the sleeves and also in the bands in micro perforated fabric sewn on the sides of The Number Of The Beast. The name of the band is applied in a thermal adhesive, with the same font used in the English brand, and follows the tones present in the original cover.

On the back of the shirt, the duality of gray and black colors follows, as on the front of the model. Eddie appears with an ax, on top of a rock, dueling with the beast and his trident. The number 82, corresponding to the year of release of the album, is applied to the sticker in red and soft colors. The inscription “The Number Of The Beast”, referring to the inspiration album, is sublimated at the neck. The model completes the official product seal certifying that you are purchasing an original and exclusive product, licensed and approved by Iron Maiden himself.