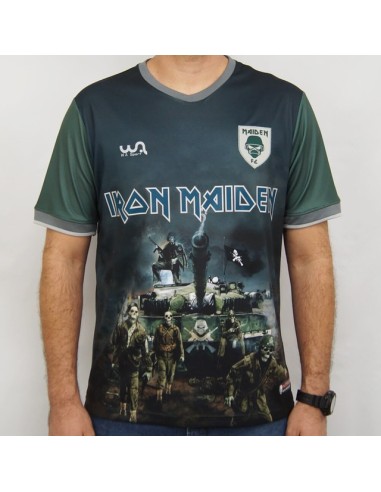 The model A Matter Of Life And Death was inspired by the cover of the album of the same name, released by the band in 2006. As well as the songs which have the theme of life and death, the shirt refers to a scenario of war and militarism including the green tones that are explored in the model.

The main feature of the model A Matter Of Life And Death is war-themed, following the album cover almost faithfully. This time, Eddie appears on top of a war tank, leading skull soldiers during a battle, referring not only to life and death, but also to existential and ideological conflicts. The shirt has the predominant green color, exploring the darker tones of the aspects of the cover signed by Thimothy Bradstreet, who combined photorealism techniques with illustrations.

The embroidered shield emphasizes Eddie's face as a military man, characteristic of A Matter Of Life And Death, with the inscription "Maiden F.C.", making a reference that we transform each Iron Maiden studio album into a team.

On the back of the shirt, in addition to the green color follows the cover illustration, at the bottom, with the scenery of the battlefield where Eddie and his soldiers would be fighting. The number 06, corresponding to the year of release of the album, is applied to the sticker in green and gray. The inscription “A Matter Of Life And Death”, referring to the inspiration album, is sublimated at the neck.

The model completes the official product seal certifying that you are purchasing an original and exclusive product, licensed and approved by Iron Maiden himself.