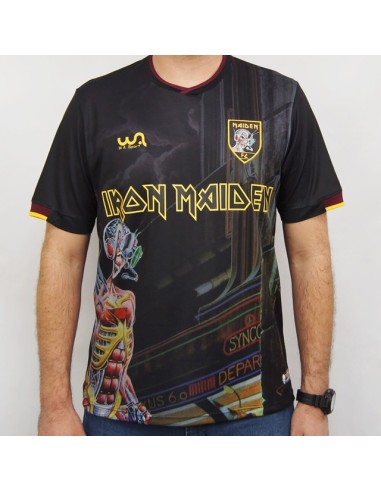 The model Somewhere In Time was inspired by the cover of the album of the same name, released by the band in 1986. The theme, this time, is a scenario based on the film “Blade Runner - The Hunter of Androides”, by Ridley Scott (1982).

The main feature of the Somewhere In Time model is to faithfully reproduce the cover of Maiden's sixth released album, precisely because it is one of Derek Riggs' richest and most creative illustrations for the band. The shirt has black as predominant, and presents the futuristic environment idealized by the illustrator.

In the front, the model highlights Eddie in the “cyborg” version, gun in hand, completing the reference to the film “Blade Runner”. The embroidered shield emphasizes the face of Eddie “the Head” characteristic of Somewhere In Time with the inscription “Maiden F.C.”, making a reference that we transform each Iron Maiden studio album into a team.

On the back of the shirt, highlighted, is the hand of Eddie cyborg, in addition to the continuation of part of the illustration of the original drawing. The number 86, corresponding to the year of release of the album, is applied to the sticker in yellow and black colors. The inscription "Somewhere In Time", referring to the inspiration album, is sublimated at the neck. The model completes the official product seal certifying that you are purchasing an original and exclusive product, licensed and approved by Iron Maiden himself.