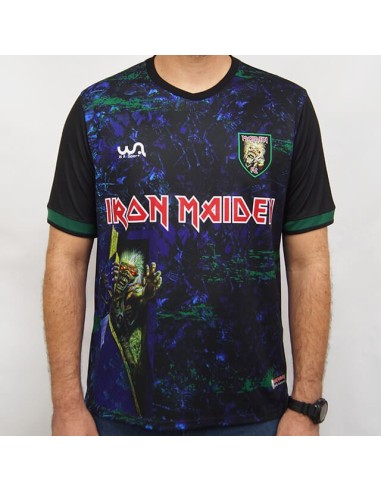 Footbal jersey official Iron Maiden - No Prayer For The Dying

The model No Prayer For The Dying was inspired by the cover of the album of the same name, released by the band in 1990. The theme of the shirt shows a cemetery as the main scenario, where Eddie would be breaking the tomb to get out of the grave.

The main feature of the No Prayer For The Dying model is the darker color tones, seeking to refer to the somber tone of the cemetery. The illustration by Derek Riggs for the album has two versions: in the first, Eddie comes out of the grave and grabs the neck of a man, who would be a "grave digger", and in the second - made available in the re-release of the disc - the man was excluded from the drawing. The shirt is predominantly black and reproduces in every print (front and back) the purple tones, in reference to the night vision of the bones and skulls of the tombs, and green, referring not only to the grass, but also to an internal secretion that comes out of the Eddie breaking the grave where he was trapped.

The embroidered shield emphasizes Eddie's face characteristic of No Prayer For The Dying with the inscription “Maiden F.C.”, making a reference that we make each Iron Maiden studio album a team.

On the back of the shirt, in addition to the black, it follows the same proposal as the front of the model. The number 90, corresponding to the year of release of the album, is applied to the sticker in red and white. The inscription "No Prayer For The Dying", referring to the inspiration album, is sublimated at the neck. The model completes the official product seal certifying that you are purchasing an original and exclusive product, licensed and approved by Iron Maiden himself.