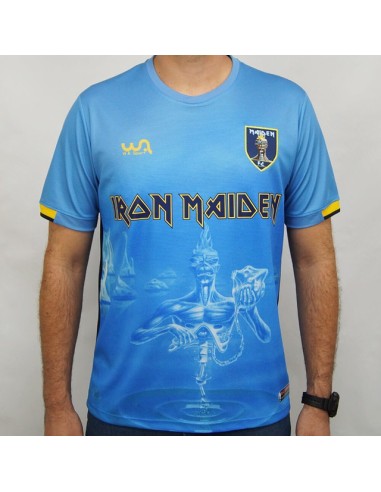 The Seventh Son Of A Seventh Son model was inspired by the cover of the album of the same name, released by the band in 1988. The main scenario, which prints all the shirt, is an ice lake that merges with the sky, and completes the predominant blue print in the mantle.

The main feature of the Seventh Son Of A Seventh Son model is the theme of the legend explored in the album's songs: a child would have been sent into the world to represent good (or evil) - the “seventh son of the seventh son”, who would have supernatural powers. The shirt has the predominant blue color, referring to the illustration glacier. Eddie appears floating on the ice lake, holding a fetus in his left hand, which could be (or not) a reference to a child with supernatural powers.

The embroidered shield bears the face of the band's mascot highlighted, with the same feature as the main characteristic image of Seventh Son Of A Seventh Son with the inscription “Maiden FC”, making a reference that we transform each Iron Maiden studio album into a team.

On the back of the shirt, the sky blue tint continues with the same proposal of the cover, following the original illustration by Derek Riggs. The number 88, corresponding to the year of release of the album, is applied in sticker in navy blue and yellow. The inscription "Seventh Son Of A Seventh Son", referring to the inspiration album, is sublimated at the neck. The model completes the official product seal certifying that you are purchasing an original and exclusive product, licensed and approved by Iron Maiden himself.