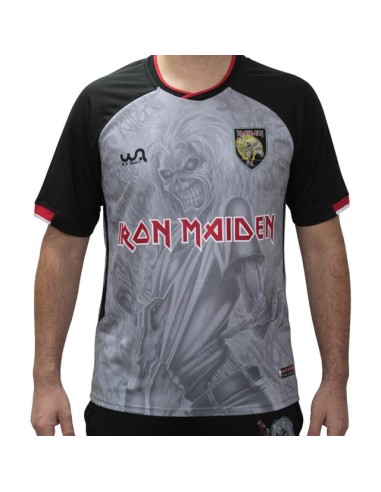 Killers model was inspired by the cover of the album of the same name, released by the band in 1981. The shirt brings, in shades of gray, the main reference of the original illustration: Eddie holding the ax and, at the bottom, hands of the possible victim who pulls the “assassin's” clothes.

The main feature of the Killers model is the shade of gray that fills the shirt – which brings Eddie from the album cover almost like a watermark. The Killers name also appears all over the shirt, complementing the original image.

The embroidered shield features the face of the album's signature Eddie – a killer – with the inscription “Maiden FC”, making a reference that we transform each Iron Maiden studio album into a team.

The shirt has some details so that the model was not just “gray”: sleeves and side strips in black, red and white at the cuff, and red also at the collar.

On the back of the shirt, the number 81, corresponding to the year of release of the album, is applied in sticker in red and white. The inscription "Killers", referring to the inspiration album, is sublimated at the neck. The model completes the official product seal certifying that you are purchasing an original and exclusive product, licensed and approved by Iron Maiden himself.